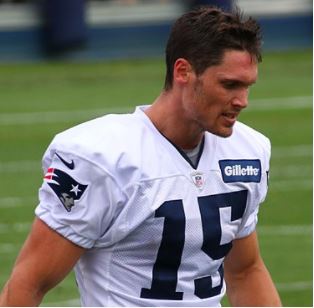 Chris Hogan is an American professional football player who has a net worth of $6 million. Chris Hogan was born in Wyckoff, New Jersey in October 1987. He is a wide receiver who was a first-team All-New Jersey selection at Ramapo High School. Hogan earned a lacrosse scholarship to Penn State and was named first-team All-ECAC.

With one year left of eligibility, he played football at Monmouth as a cornerback and receiver. Hogan went undrafted in 2011 and was signed to the practice squads of the San Francisco 49ers and New York Giants in 2011, and the Miami Dolphins from 2011 to 2012. From 2012 to 2015 he played for the Buffalo Bills. Hogan signed a three year deal with the New England Patriots in 2016 for $12 million. He set a Patriots franchise record for most yards receiving in a playoff game with 180 in the AFC Championship Game against the Pittsburgh Steelers.

Hogan is married to Dr Ashley Boccio, a foot doctor and Long Island native whom he met at Penn State when they were both lacrosse players. The couple has twins, Chase James Hogan and Parker Kay Hogan, born in March 2017. Ashley was pregnant during the Patriots’ Super Bowl LI run and could not attend the game, but she did attend Super Bowl LII. While with the Patriots, Hogan stayed in Foxborough, Massachusetts during the NFL season but drove down to his family home in Huntington, New York on Monday nights, spending Tuesday there before returning to Foxborough. Hogan is of Irish descent.